And, we’re back!  In this part of the Workforce Conundrum, we will explore (at a surface level) some of the challenges the workplace faces due to demographic differences. This will be the last major influencer we explore before moving from the ‘Why’ explorations to some of the ‘What’ actions that are needed to address the issues we’ve previously discussed.  Demographic differences by their very nature express trends, not absolutes. For example, if I were to say that cats are lazy and proud creatures, that would not necessarily apply to all cats, but might serve instead as a general observation about their behavior. This insight might keep you from expecting most cats to go and fetch a stick when you throw one across the yard.  So, with that, let’s get on with the exploration of why demographic differences may be part of the challenge of the Workforce Conundrum.

Five Generations: When? How do they Differ?

I expect many of you have heard that there are now five generations in the workforce.  Let me just take a minute and cover what we mean by that.  There is the Greatest Generation (born 1945 and earlier), the Boomers (born 1946 -1964), Gen Xers (born 1965 – 1980), Millennials (born 1981 – 2000), and Gen Z (born 2001 and later).  While I am sure there are members of the Greatest Generation and Generation Z in the workforce, the vast majority are currently Boomers, Gen X, and Millennials.

As you can see in the graphic (Figure 1) below which pulls from a study[i] by St. Aubin Haggerty & Associates, Inc., each generation exhibits different attributes, expectations, and views on work.  Let me highlight two examples from the study.  When it comes to attitudes about work, this study indicated that Boomers “live to work,” while Gen Xers “work to live,” and Millennials differ even further as they “have not lived without computers.”  (Remember my cat example, yes, these are generalizations!)  These differing attitudes will reveal themselves in behaviors in the workplace.  Tendencies toward working late or coming in early or the frequency in which vacation time is used are a couple behavioral actions that might differ. 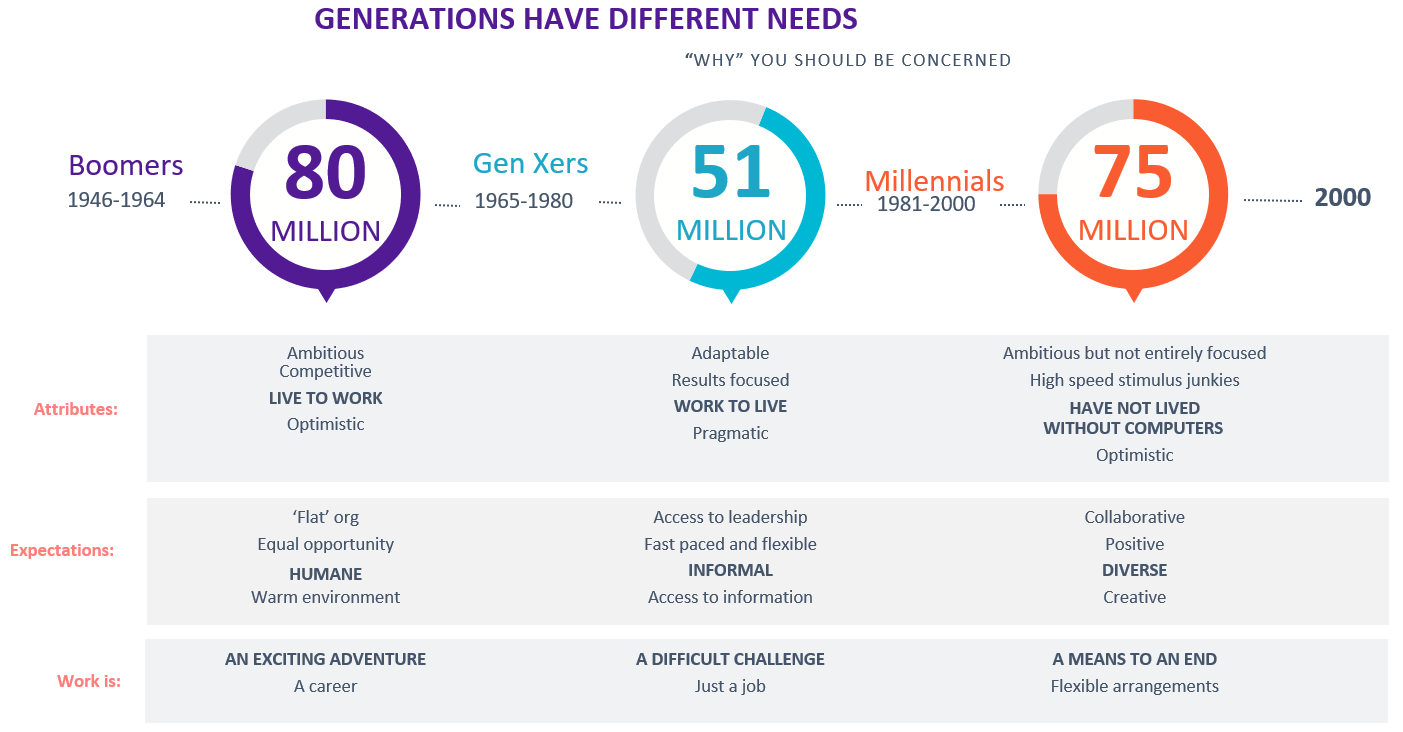 The differing views on work are also worth noting.  From youngest to oldest in age, Millennials tend to view work as a means to an end, while Gen Xers view work as a challenge.  The Boomers?  They view work as an exciting adventure.  Because each of these age groups approach the workplace differently and with different needs, challenges will inevitably arise in companies that cannot, or perhaps more accurately stated, do not adapt their workplace to the needs of the employees they are striving to retain or those they haven’t been able to attract.

How Gender Impacts the Workplace

Okay…this issue is delicate and always seems to get somebody in trouble, but there are differences between the genders when it comes to work, so, let’s discuss some of these.  Men and women tend to exhibit different characteristics when it comes to how they approach the workplace. For example, sticking to a few attributes and expectations, these words have different meanings:

Before discussing, let’s offer a little clarification as many of the above words can be interpreted drastically different.  When this research refers to men exhibiting authority, they describe it as men want to ‘figure it out themselves’ and when women demonstrate engagement, they do so in the work context as they ‘seek input from others.’  Both list Team Player, but how they view their role on that team is different as well.  Women tend to be team players by striving to help all on the team succeed, whereas men look at being a team player when each person is performing their role.

I found one other interesting study in the appendix of a conference paper[ii] on women and overcoming the glass ceiling.  This is a study that isn’t a study, which for me, gives it much more validity.  (Studies that set out to show something, can be self-fulfilling prophecies.)  This is more of a gathering of several studies that did not set out to study gender differences in executives but had information that provided insights to just such differences.  Based on the data provided in Figure 2 below, you would wonder why anyone would be hiring an executive who wasn’t female!

What do We Know about the “Whys”

There are differences in age and gender with respect to attitudes and expectations from work.  In the coming articles, we will add this to the list of what we have already learned and explore “what” should be done about it.  Until next week!